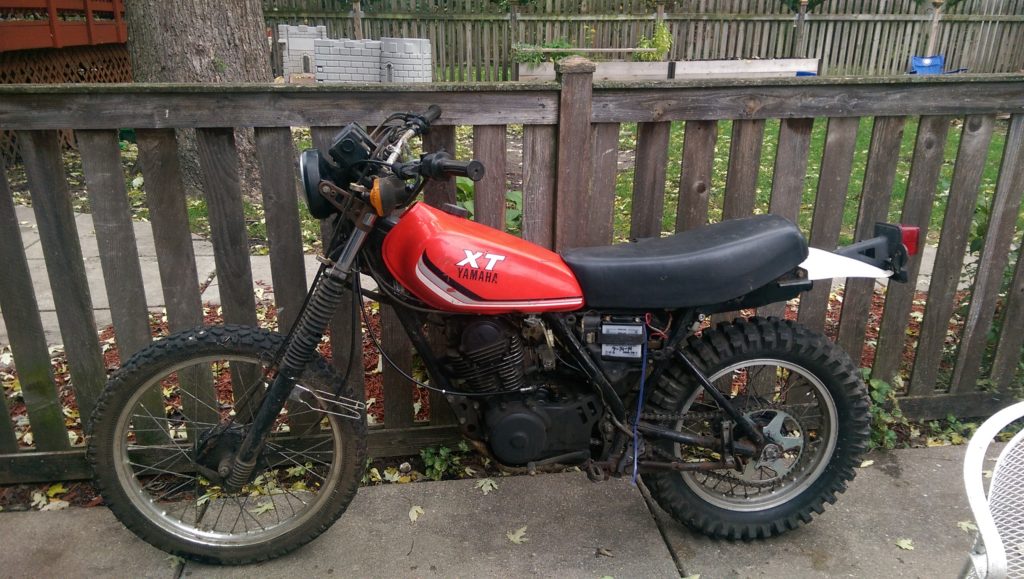 So a guy I knew was selling a 1982 Yamaha XT 250 in a sorry state. He got in because it came with another bike, an RM minibike or something. Being such a fan of the film First Blood(as you can see from my other post), I bought it despite the sorry state it came in. The problems he noted were broken clutch perch and incorrect rear wheel. I gave him $150. Well several years later and I FINALLY got the damn thing running. Over this time I slowly and slowly fixed and ordered the parts I could. I even picked up a spare parts bike for about 120$ a few years ago.

I bought a new rear wheel, which made me sorry for my mailman because the shipper literally saran wrapped the hell outta the damn thing and slapped a sticker on it. I bought a new sprocket, chain, clutch perch,clutch lever, countless bolts, and more over time. The carburetor was a nightmare I will condense here.

The bike had compression but with a new battery and plug I had spark but not gas. I pulled the carb off and noticed a piece near the bottom accelerator pump was broken. This carb is overly complex. The 1980 First Generation XT 250 used a simpler carb. The carb I have has this “accelerator pump” type device add on. It was a feature from 1981-1983 on the XT 250. The 1984 250 Carb and bike were very different. So make note of this unique carb it is tricky to find at all, let alone a working one will still bring a few hundred dollars.

Luckily I first found a junk carb for parts on ebay for 40$. I was able to replace the broken part and try it again. No luck the bike never fired and I got tired of kicking the bike over dozens of times to no avail. In the meantime I fixed other stuff, repainted the exhaust, and little things like made sure the brakes work and fixing the clutch cable. A few years later I finally bite the bullet and spent 80$ for a complete carb rehaul kit, this included almost all the gaskets and jets needed to rebuild the carb. So I took apart both carbs and cleaned the shit out of them. I used the best parts and the kid to make one good carb. After all this work still fucking nothing, no “pop” it didn’t even want to start. After spraying some carb cleaner in the cylinder the bike ran for a few seconds, so the problem was still the carb.

I’m no expert mechanic but through trial and error and my old man’s wisdom I have a basic understanding of how a bike works. After this I just kept watching ebay for a spare carb. They would sometimes pop up for about 200$ and sell. Eventually one was up for 250$, they included a video of the bike running before they took it apart, so this should be “plug and play”. I bit the bullet and paid more than the price of the bike for it. Upon further inspection of it, it was missing a choke lever and had an extra hole in one side which puzzled me.

I finally put it on my bike with some fresh gas. I gave it some more kicks and I felt maybe a little more kickback but no signs of life whatsoever. So after a deep sigh I was about to give up and maybe try again a few days later. With some carb cleaner in the cylinder we tried again. Nothing at first at all, which was weird. Then somewhere around the sixth kick it was brought to life, I assumed it would die in a few seconds but this “priming” actually worked and it kept going! Big relief this was, since if this didn’t work I was ready to pay someone to take this shit from me on Craigslist. Now my only hope is the clutch works and it goes through all the gears. Once this bike is settled, I’ll finally have a dirt bike, or rather THE bike from First Blood. Did I mention how much I like that film?