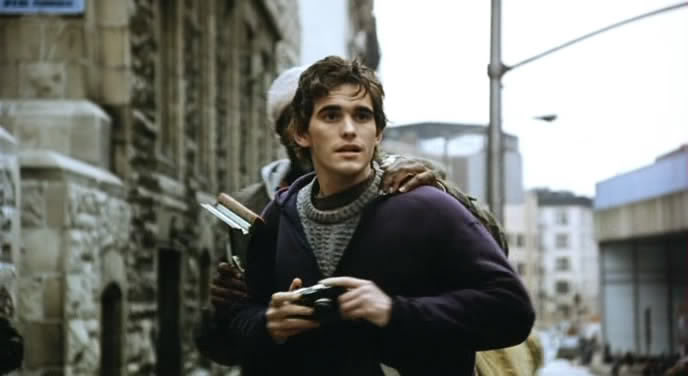 So when was I a kid growing up we didn’t have the luxury of cable television, only whatever channels were broadcast over the air poor us right……The first world problems this led to was, Me not developing ADD, if such a thing exists and B. not knowing what shows and movies my classmates were talking about often.

Weekends were pretty dull at many points throughout grade school. I would often grab the Sunday paper and look at what movies would be on our select few channels. UPN,WGN, and others would all together maybe have 5 films or so. This was the late 90’s bear in mind. All I would have is the title and a short few word description of the film. I won’t even try to remember what the description of The Saint of Fort Washington was but I was intrigued and when next Saturday came around I sat down and watched it.

It features Danny Glover and Matt Dillon as two homeless individuals struggling around Manhattan. Dillon is quickly evicted by his slumlord and a schizoid man who finds himself on the streets with not a lot more than cigarettes and a camera sans film. He quickly finds Danny Glover’s character, a veteran homeless man whom shows him how to stay alive. The two become quick friends and help each other along the grim wasteland Manhattan was, gradually shelling from its poor reputation in the 80s.

This first time I saw the film at a young age, I can’t recall how I felt about watching it, sad I would imagine. But I knew it was a good movie and I liked it. I never forgot about it. Years pass and eventually it’s on a cable channel in HD,(my brother got cable and a nice tv when I was in High School sometime maybe like 2006). I sat down and watched it again, now in a more grown and conscious state I really got into the film and enjoyed it even more. It really stands out and holds up, maybe I like it more than I should be I can’t shake it, the story,the performances it still disserves more than what I imagine happened. Released in 1993, so-so reviews, poor box office performance, and soon relegated to spending the rest of it’s life unrented in Blockbuster video. I’m sure some 90’s video store junkies still have this cover engrained in their heads. Too bad they never bothered to rent it.

Alas I have given to little to no explanation or description of the film and why I like it as I do but it’s a great little gem that shouldn’t perish. I won’t attempt to rate it but I would advise one to find it and watch it when possible. Directed by Tim Hunter, whom direct River’s Edge, another favorite of mine. Both films are recommend. Definetly an underrated director.

One thought on “The Saint of Fort Washington”