Where to begin about Liquid Sky……

Years ago I found some list of lesser known cult/underground horror/whatever films and Liquid Sky was somewhere on the list. I read the brief description and saw the poster and was very intrigued. I mean look at this fucking poster: 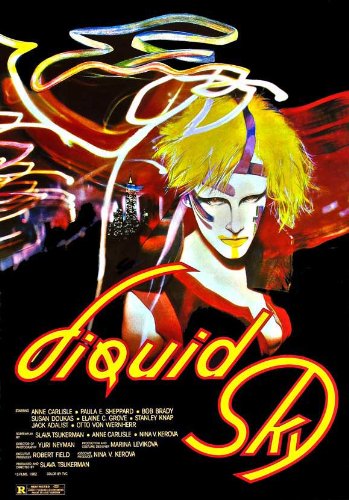 This is the only film on that list I set out to watch and couldn’t find a real copy quickly.  Some kind soul uploaded a VHS rip to youtube. I watched it with a friend one night and FUCK! What a goddamn amazing  movie. How did anyone pull this off and get it made?????

It’s shot in Manhattan in the early 80’s starring Anne Carlisle in a dual role. I won’t waste much time attempting to explain the plot but it involves models, drug addicts, rapists, aliens, a German guy, and much more. The aesthetic/ makeup/ music/ and sets are all truly incredible and a visual feast. I urge anyone to find and watch this film. After I watched it I became quite obsessed. Like HOW did anyone get a small amount of money, come up with this idea and script, and finally film and release it! It seemed like something that shouldn’t exist which is what interested me. It was too fucking cool to have actually been made basically.

Limited information existed on the internet but I found out a bit about the director and some actors. I was still left with more questions concerning the conception and execution of this film. I mean where was it filmed precisely? How many people did the costumes and makeup!? Who wrote “Me and My Rhythm Box”??? The list went on…. it was just too cool. I bought the novelization, written by Anne Carlisle as well. It’s a good read and gives you more background about the main characters including the “rich cunt from Connecticut”. I also find an interview with the director Slava Tsukerman in an old issue of Heavy Metal, I posted scans HERE. I’m still looking for more background and interviews with ANYONE involved in the production.

Still the film intrigues me so, I urge you to find it and watch it.

Last year I ventured to Seattle, as a quick Nirvana and First Blood pilgrimage. The first record store I went to I found absolutely nothing but then just sitting in some sort of “special new arrivals” section I found the fucking soundtrack! I could have ordered this at some point but when you run across things you are not even thinking about it is a real rush. I was a bit boggled but then remembered more people have seen this movie than I thought. It was just long before my time.

I recently was able to see the film in theaters are it was quite the treat. I wish I could live in a Liquid Sky like world, for better or worse.

Me and my rhythm box out~