Originally I wanted this site to be like bringatrailer.com, only for motorcycles. They had the ThrottleYard but it disappeared at some point. So originally I did that because I watch ebay and craigslist like a hawk. I then realized people interested probably do the same. Then I thought about being like The Selvedge Yard wherein I write articles similarly themed because I like that kind of stuff he does. Now I have finally decided the site will be a personal blog posting whatever I want for me. Be that poems,songs,short stories,pictures, updates on my vintage motorcycles when they break down, frustrations, film criticism, work problems, personal health issues and more. In effort to not be a copycat and to somewhat put some stuff “out there”. 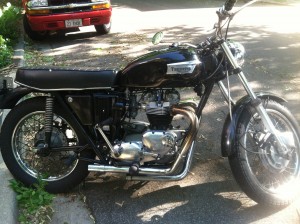